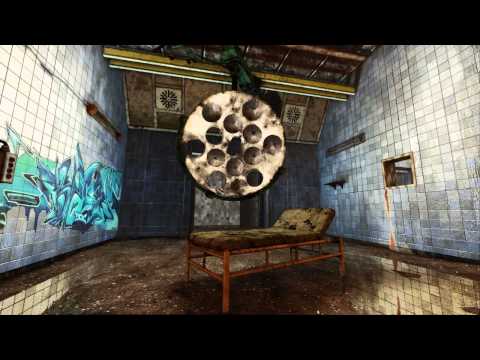 This scene was modelled off of an abandoned German World War II Military hospital that has fallen into a state of disrepair.

I built the assets for this scene in Maya and then textured them in Substance Designer, with some touch-ups and custom maps also being done in Photoshop. I also did my initial layout and all the modelling in one assembled scene in Maya, then when the assets were ready to be textured I imported them into the Unreal Engine with the textures that I had created in Substance Designer. They were exceptionally easy to assemble in UDK as they had all been exported from the origin and as such snapped into their appropriate places. However, I prefer the modular approach as it allows me to get a better sense of scale from the players view while working on the scene, and it is easier to modify and customixze the level at later stages. There were a few pieces in this scene that I created in Modo using their new Mesh-Fusion plugin and while it was a novel way to create the high poly geometry it created a few problems with getting acceptable low poly geometry and resulted in me pretty much having to rebuild those pieces with the more traditional Maya tools. I was able to retopologize some of the pieces, while others were easier to rebuild from scratch.